A new narrated paddling guidebook to the Green and Colorado Rivers celebrates the 150th anniversary of the original Powell expedition by combining the dramatic story of 1869 with color landscape photos and trip planning info. In this interview,author, photographer, and boater Mike Bezemek shares how it all came together—including how he lugged a small library down the river in a Watershed drybag. 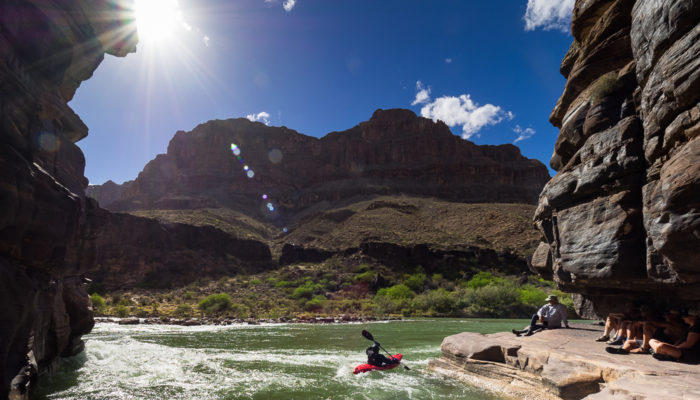 Why is a 150-year-old expedition route still relevant today? Why should people care about this story?

Well, to start, it’s easily one of the greatest adventure stories in American history. The 1869 Powell expedition was pretty much the first exploratory whitewater descent ever. A one-armed former Civil War major turned self-taught geology professor shows up to a sleepy railroad outpost in Wyoming Territory,hauling four wooden-keeled rowboats. With a 10-man crew, mostly mountain men and ex-soldiers, they set off down the Green River with a bunch of flour, some bacon, and mapping instruments—having never run a rapid.

Along the way, they encountered and named canyon after canyon, many of which are now among the most famous whitewater trips in the Southwest. They were completely unprepared for the trip. They portaged or lined about 100 of the hardest rapids but ran maybe 500 of the easier ones—plus a few hard ones, mostly by accident. Their rations spoiled, their equipment broke, their boats took a beating, and they even sunk one. They thought they could last ten months, map the river course, and hole up through the winter if necessary. But three months later, only six emaciated men wearing tattered rags emerged from what Powell called Grand Canyon. And the story became a legend. 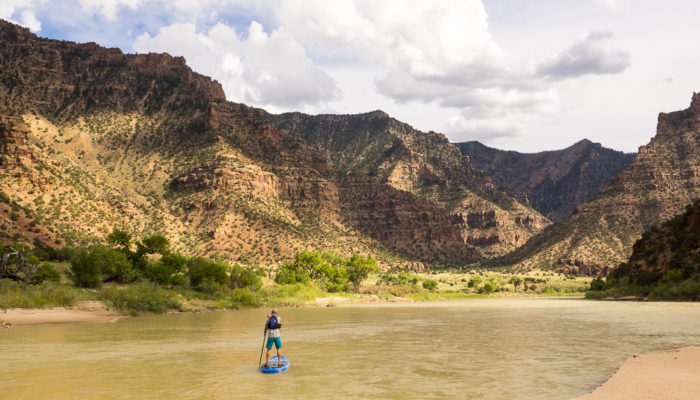 How did you become interested in the Powell route?

It started with winning a winter Grand Canyon permit about five years ago. I suggested to my buddies that we make it a “fresh eyes” descent, meaning everyone that goes has never seen the river before. Instead of joining a bunch of crusty veterans who bark orders at you about what to see and do, we could just go on our own and figure it out for ourselves. I made an off-hand comment that it would be “sort of like Powell,” and suddenly I realized I didn’t know exactly what that meant.

I tried to read Powell’s book when I was a young raft guide and beginning kayaker, but—spoiler alert—that book kind of sucks. At least as your first book to read, I now realize. I mean, it opens with 100 pages of dull descriptions about topography. Not a page turner. But 15 years had passed by the time I won the permit, so I decided to try again, but differently. I picked up Michael Gighlieri’s book First Through Grand Canyon, which collects the original journal entries and letters from all the crew members. I read those entries straight through, and it was amazing stuff. Lively, exciting, dramatic.

After that, I read pretty much every book I could find, and I decided I wanted to follow the whole 1000-mile route, not just the final 300 miles through Grand Canyon. Over the course of five years, friends and I used kayaks, rafts, paddleboards, and packrafts to explore the route. And depending on storage space, I dropped as many books as would fit into my Watershed Ocoee or Chattooga bags and brought them with me down the route, comparing 1869 descriptions of events with the landscapes we encountered. 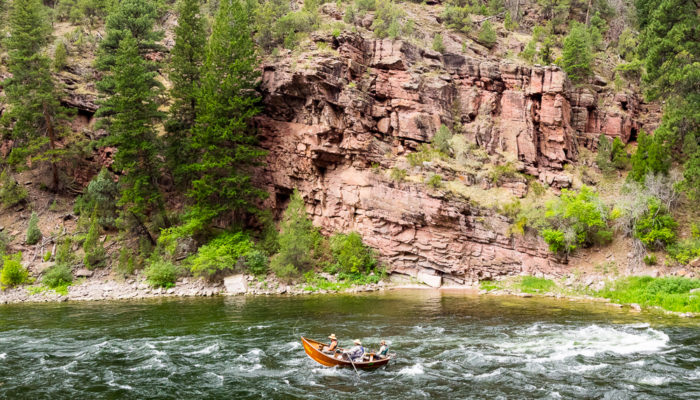 So how did your book come about?

Several years into following the route, I was hired to write a different guidebook called Paddling the Ozarks. After that was done, I realized my Powell project could work as a book, but in a different way than a typical guide. There were already a lot of topo map guides to each section, but there was no book that provided an overview to the whole route, showed where everything was, showed what each section looked like in photos,explained all the planning details about permits, lotteries, distances, and character.

Also, for a number of reasons, there is a lot of misinformation about the 1869 expedition story, so I wanted to do a retelling of the 1869 story but in a fun and compact form that’s similar to how river runners talk about the tale at a campfire. The result is a narrated guide to both the route and the story. 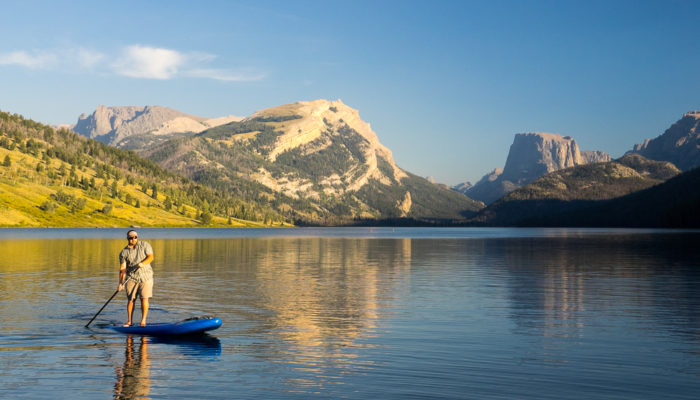 What’s your favorite trip on the route?

That’s a tough one. I think I’ll own the cliché though and admit it’s Grand Canyon. But the other canyons are not far behind. The sections through Canyonlands—Labyrinth, Stillwater, and Cataract—are my next favorite, in large part because of the ridiculous scenery and side explorations. Oh, but Desolation Canyon ties for second with those. I realize I’m not really answering your question, because I have four trips listed as “second-favorites.” Really, my favorite thing about this route is the surprising variety among the trips. There’s class IV, class III, class II, flatwater. You can do a weekend trip in some spots, or a week, or a month or more. Even the reservoirs offer remarkable opportunities, which are often overlooked in terms of paddling.

How does knowing the story affect a trip through these canyons?

I think it works a few ways. One, with the exception of the dams and reservoirs, the canyons still look remarkably similar to 1869. So, when you know the history, it’s easy to imagine the original adventure more fully. In that way, the Powell expedition really comes to life down there. River runners love to talk about the story, chat about events, and imagine what it must have been like during that first descent. I think it’s cool to read about rock formations the expedition stumbled upon and then go see these for yourself.

And also, knowing how the rivers used to be back in 1869 helps consider how they’ve changed today, with the addition of the dams. For example changes in flows due to dam releases, introduction of non-native fish, invasion of tamarisk along the banks, which makes camping pretty tough in many places. These changes are a big topic currently, as people consider how the rivers could be managed in the future in ways that best preserves them for future generations to enjoy.

Did anything happen out there that was similar to 1869?

Obviously, my friends and I are very lucky to have the benefit of modern equipment and knowledge. So our trips are fully recreational and not battles for survival like 1869. Still, we do see some similar types of challenges—whether flows suddenly rising from distant storms or snow melt and discovering a rapid has suddenly risen in difficulty. Or dealing with sun exposure and wind storms. Having to fix boats or equipment mid-trip. We’ve never run out of food, but we have had issues with water supplies and damaged filters. We’ve also had a dramatic number of beer cans get punctured during transport along the route, which I guess is our 21st century equivalent of spoiling rations. 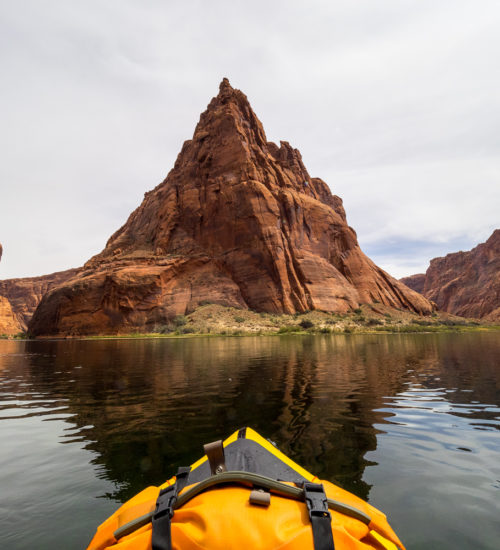 What’s the most interesting thing you learned during your research?

For me it’s definitely how much mystery still surrounds the Powell route and 1869 expedition. All of these mysteries are discussed more fully in the book, shameless plug, but let me just mention a few. The launching point generally accepted for 50 years is not the exact launching point. Many of the accepted locations for key events have been misplaced on maps since a few years after 1869. There were three crew members who left the expedition on foot a few days before it ended and were never seen again. They were probably murdered but the exact details remains a mystery, and historians are actively working to uncover what happened.

And that whole face forward while rowing thing? The journals and letters show the Powell expedition accidentally discovered this technique in Split Mountain Canyon several decades before it was supposedly developed. And later, in Grand Canyon, one critical rower named George Bradley may have used thetechnique, after a rope snapped during a lining, to row the largest rapid ever run at that time. Regarding that last item, with no clear proof, it’s just a theory. But I know the best place for thinking about this amazing adventure story isn’t on the couch but down at river level, in a boat, on the Powell route.

For more on the book and how to buy: http://mikebezemek.com/paddling-john-wesley-powell-route/