“We were out surfing, just floating. The waves had died. They were good earlier that day but for some reason, they just went flat. Then I looked out at the horizon and it was like a painted wall. I looked behind me and there was another one. I felt trapped. Then I looked to my right and Adam’s just staring. Then he says;

Elijah Burton reflects, staring out his window on an overcast Oregon morning in his recently released short film ‘Breathe Theresa,’ written and directed by himself and Coleman Weimer. The film stars real-life friends Burton, Adam Edwards and Kenny Hamlett who’ve made memories together surfing the coast and traveling in Burton’s van, “Theresa.”

Little did they know that this chapter of their lives was about to come to a close.

Trying to purchase a new house with his partner, Burton is in need of additional cash to cover the down payment forcing him to make the gutting decision to sell the van. This prompts the three friends, Burton, Edwards and Hamlett, to embark on one final hurrah with Theresa to the coast. The only thing is, his friends don’t know he’s selling the van.

“I think I’m gonna wait until we’re on the way to the coast to tell them,” Burton says to his partner, looking down into his coffee as he sits at the window.

The film features captivating, moody shots of the dreary fall aesthetic of the Pacific Northwest and rich, passionate dialogue between loving friends. Simultaneously, it tackles topics of what it means to grow up as a Black person in outdoor recreation — a predominantly white space —  and what obstacles are still faced to this day. The result is a masterpiece, and one the three friends hope will encourage other Black people and children to get outdoors and experience the joy they have there. 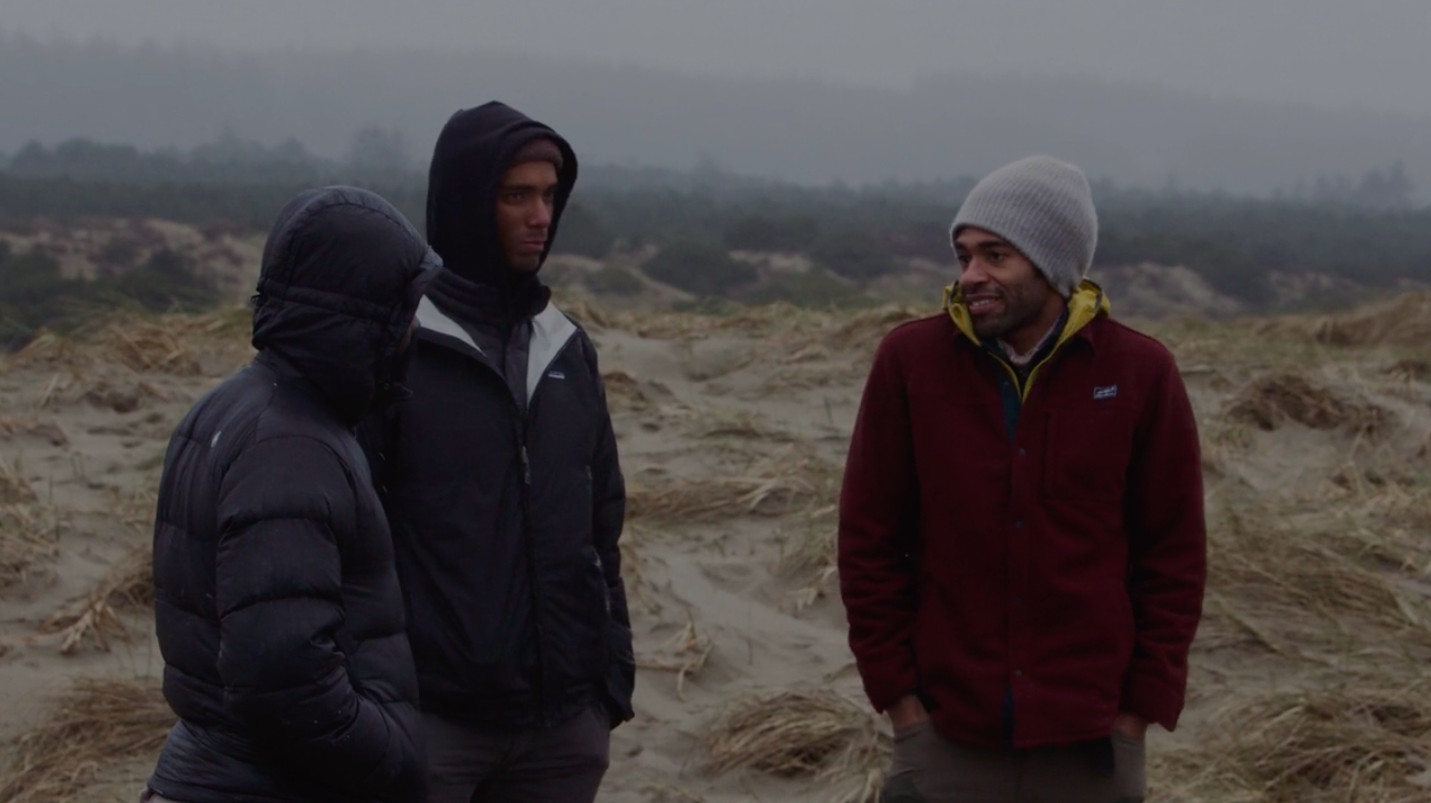 We were lucky enough to get a chance to speak with Edwards (who happens to be on Team Watershed for 2021), Burton and Hamlett about their connection and vision for the film.

Q. First, a little background! What gave you three the idea to make the short film?

Burton: The main push for the film was from conversations we (Adam, Kenny and I) had on our first time surfing together. We talked about the need for there to be more content (I hate that word) with Black faces and Black stories. It doesn’t matter if it’s good or bad or if anyone even sees it. We just have to make stuff or things will never change. Around that time Coleman approached me and asked if we could make a short film about my van. The timing was perfect, so we got to work.

Hamlett: I had been writing about my experiences being a black person while navigating these spaces and once I became a filmmaker I knew I had to do a project on this concept. It wasn’t up until recently that I ever did anything in the outdoors with other Black people and I want the next generation of kids to be able to see themselves in these spaces.

Q. Could you give a brief synopsis of the story line?

Edwards: The story is about 3 Black surfers in the North West who go on an overnight mission to find waves and peace but end up being denied by typical PNW surf conditions. Little do they know this would be the last surf mission in the van because the van is getting sold to buy a house. All that the outdoors means to them is revealed along with stories of those who inspired them to get out.

Q. What messages do you hope to convey through the film?

Burton: I hope that at the end of the film people get a glimpse into what it means for people of color to pursue the outdoors. The cost of it both monetarily and emotionally.

Hamlett: I hope to showcase our Blackness as naturally as possible. To show we are non-monolithic as a people and that we really are and can be whatever we want.

Edwards: I hope that people can appreciate the differences of outdoor experiences the film tries to showcase. As well as a slight glimpse into the overarching themes and norms in our society that make each of our experiences unique and nuanced for better or for worse.

“I finally feel like I know what those people in stoke films feel when they’re surfing or snowboarding or whatever with their crew doing what they love.” ~ Elijah Burton

Q. How did all of you meet and connect?

Burton: Basically, through social media. I met Adam through an Instagram Account, MelaninBaseCamp, even though we lived down the street from each other. I met Kenny through Adam on a day at the coast.

Q. Could you explain your relationship with the outdoors, and how meeting each other has changed it in any way?

Edwards: The outdoors are the closest thing I have to religion. It is a centering space for me, something I love to interact with solo but also share with friends and loved ones, even strangers. Meeting Elijah and Kenny has created a great space wherein we share interests, goals and dreams and can make them happen, sound board for one another and also remind each other to just enjoy life- to get out there and have a good time. No code switching, no accommodating others stereotypes.

Burton: The outdoors was always a place to get away and exercise certain instincts that come out in adventure sports. The outdoors always felt lonely even if I was with others because I still couldn’t quite take the mask all the way off even if I felt more myself. Now that I’ve meet Adam and Kenny it’s not so lonely. It feels like we have something or someplace to build a real community on. I finally feel like I know what those people in stoke films feel when they’re surfing or snowboarding or whatever with their crew doing what they love.

Q. The Black Boy Joy Tour is referenced a few times in posts about the film, could you describe what this is and what it means to you?

Edwards: Just pure unfiltered true self enjoyment of the activities and spaces we hold dear. The tour is many things but at its base level for me it’s getting out and sharing space and time with the folks I love and hopefully meeting new folks along the way, learning about their passions through shared experiences.

Burton: Black Boy Joy Tour is so much! It’s Kenny’s brainchild but it feels like the vehicle for us to build that community of minorities in the outdoors. It’s the dream of making films and photos of black folk mountain biking, kayaking, surfing etc. for the next generation to reference. For example, I want to hear a story of kid falling in love with climbing because they saw a video of a bunch of people that looked like and spoke like them in Smith Rock.

Hamlett: It just means being black and being joyful. Something you don’t see often in media.

Burton: I think continuing to make a film for Black Boy Joy Tour is next. Whatever Kenny or Adam say to do – I’m there!

Edwards: Getting back on the road and shooting more of the tour, some written accompaniment and perhaps another fictional or documentary short film. 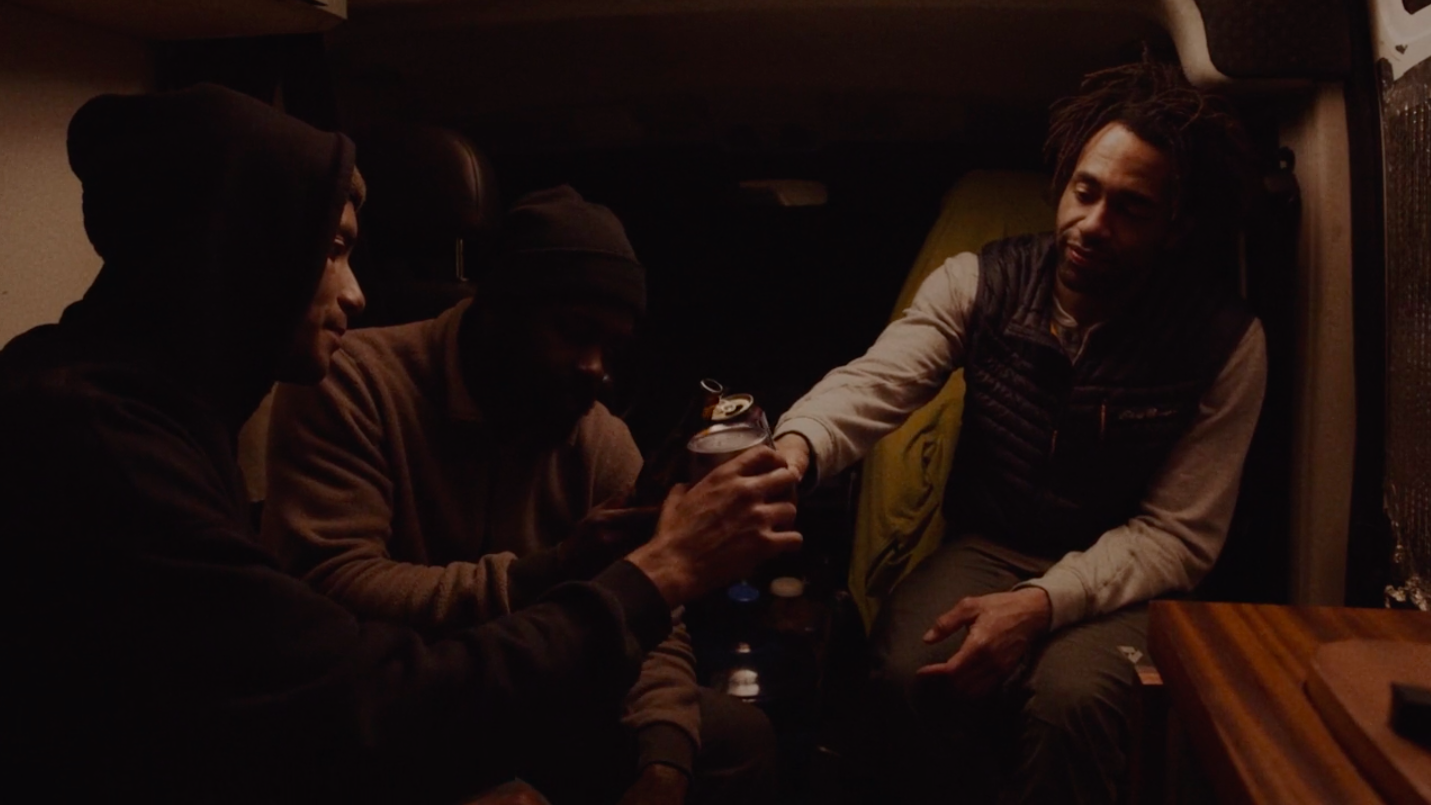 Following the tense, atmospheric scene of Burton dropping the bombshell that he’s selling Theresa, we find the group later that night in the van, chatting over drinks. The guys each reminisce about figures in their lives who inspired them to find their identities in any space and embrace who they are. Each anecdote is a piece of moving dialogue that highlights the individuality and scope of POC experiences coming into the outdoors.

Burton then asks Edwards and Hamlett, “I never told y’all why I named the van Theresa, have I?”

He recounts his early idea of building the van, having trouble placing just where the desire to do so came from.

“So much of what we do, we’re the first or we’re the only, or we’re both,” Burton says.

He reminisces on how his grandmother, Theresa, was the first one to give him and his brother skateboards when they were kids. How she was the first to buy them boogie boards and take them to the ocean, how she was the reason he caught his first wave and experienced the weightless ecstasy of being carried by the ocean. Even when they would be the only People Of Color at the beach or skate park, she would support their dreams without question.

“We just sometimes need time to be ourselves, even when people think that you should be something else. So, [my grandmother] really taught me to breathe. When I made this van, it was for her. It was from her.”

Watch ‘Breathe Theresa’ for free on Vimeo below, or by clicking here.